Sometimes we forget that Labor Day was created to honor labor, which Hannah Arendt described as the most human expression of the Life Force.  I have long been interested in the way that tarot artists portray scenes of labor, particularly in the Pentacles and Wands cards, because labor is such an important part of the balance of life.  And in the way that I always come back to the Rider-Waite-Smith [RWS] deck, even though I now have a large collection of decks, with many more beautifully illustrated, I find that Pamela Coleman Smith seems to do the most with scenes of the working life.  (At least in the decks I’m familiar with.)

Below is a tarot spell for attracting more creative work into your life, or bringing more creativity into the work that you have.  It uses “Three” cards, because Three is the number of creativity, but also brings in communications and community, which nourish and stimulate the creative life.  (For more on this topic, see my previous post, June 9, 2013, on “Tarot of Celebration.”)  The creative person needs to strike the right balance, because one also needs focused time to go inside one’s head and concentrate on the work. 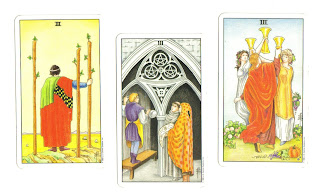 When you lay down the first card, the Three of Wands, think about how the exchange of ideas, including cross-cultural exchanges and modern communications media (such as the Internet), have contributed to the whole world of creative expression.  Think about ways that you can take greater advantage of these networks of energy, because, in magical thinking, everything translates into energy.  Envision yourself at the center of some very active enterprises, where goods and ideas are continually coming in and continually going out.

With the next card, the Three of Pentacles, visualize yourself hard at work, enjoying the altered state of consciousness—the sense of being outside of Time—that focused work can generate.  Think about how you can bring a workman-like, artisanal quality to everything you do.  Also, just as the RWS version of this card shows the craftsman conferring with others, think about the people who are in a position to bring you work, and the people who are in a position to appreciate—or at least benefit from--your work, and how your relationship with them also adds meaning to your life and work.  (This “relationship” includes people we never even meet.)

Finally, set the Three of Cups in place while thinking about how your life and work are enhanced by being a part of a community of celebration, and also the ways in which you can bring the creative element into communal pleasures.  Think about work itself as part of The Beautiful Life, and how, through your work, you are part of the dance of life.

Looking over the spread as a whole, note that 3+3+3=9, which multiplies the creative effect, with Nine being the self-replicating number in magical numerology.  If you’ve been living like a hermit, you could put Major Arcana card Nine, The Hermit, under the Three of Pentacles.  This honors your need for creative solitude, but, in relation to the rest of the spread, affirms your willingness to engage in creative exchanges with others, (as many historical and legendary hermits turned into generous guides and hosts when the occasion arose).  Some women might prefer to put the Nine of Pentacles under the Three of Pentacles.

By the way, if you happen to find yourself in lower mid-Michigan this Labor Day weekend, I shall be at the Triple Goddess bookstore in Lansing, (as I always am on the first Sunday of the month, from April through November), from 1 to 2:30 p.m. on September 1st.  Because this is also the time of year when many of us are going back to school, I’ll be demonstrating an exercise called “Entering the Magical Academy,” using Corrine Kenner’s “Wizards Tarot.”  This exercise is about getting the most out of this new semester in the School of Life, and includes identifying a “hidden teacher” card.  I shall also be discussing magical techniques for enhancing mental potency.