ALIGNING WITH FAIRY-WORLD ENERGIES ON THE EVE OF MAY

Tomorrow is May Day, which is rich in folk custom and lore, with roots in the old Celtic fire festival of Beltane and the Roman Floralia in celebration of the goddess of flowers.  This is a time when the energies of the Fairy World blossom forth at full strength, just as, in our northern climes, many flowers are blooming, and the trees are starting to leaf out.

In a previous Beltane post, (May 2013), I wrote about how this is a good occasion to consult fairy themed tarot and oracle decks to affirm and learn more about your relationship with the Fairy World.  Because I need to reaffirm my own connection to the Fairy World—something that’s easy to neglect when you work full time and also have family caretaker duties, though having age-related health issues yourself—I have brought out my “Fairy Ring” oracle, (which is designed by Anna Franklin and Paul Mason), and which features “Fairy Festival Cards” illustrating the eight ancient festivals of the Celtic year wheel.  Using a card search technique, (as opposed to shuffling and drawing cards at random), I will pose the question:

Please show me how I can connect with the Fairy World at this special time of the Year.

First, however, to connect with the seasonal entries, it’s best to step outside to take in what’s going on in Nature where one lives.  Having stepped outside on this morning in lower Michigan, I notice that daffodils and forsythia bushes with their yellow flowers are the prominent blooms, though periwinkles and violets are also to be seen.  The trees have not yet leafed out, though in previous years I have noticed that right after May Day they all seem suddenly to be in full foliage.  The buzzing of redwing blackbirds and the clacking of grackles define the sound environment, though robins, song sparrows, and Canada geese are also heard.  A baby rabbit darts into the copse behind my house.  It’s chilly this morning, but a warmup is expected.

Now, back to the card table: 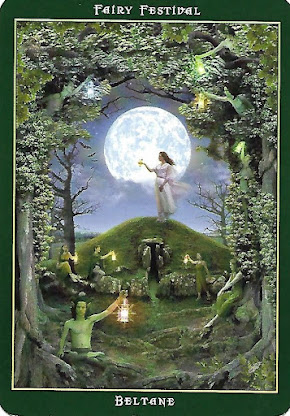 I shuffle and cut my cards in the usual manner, while posing the question about connecting with the Fairy World.  When I feel that I have shuffled enough, I turn the deck over so that I am viewing the picture side of the cards.  I then thumb my way through the deck until I come to the Beltane card, and then I pull that card, as well as the ones just before and after it.  The three-card spread that I get out of this does not offhand look auspicious for me, so it’s going to take some thought as to how to interpret this.  The cards are 1) the Phooka, 2) the Beltane card reversed, and 3) the Fairy Horse/Kelpie.

So, the first notable thing here is that the Beltane card is reversed, indicating that I’m not fully able to express and appreciate the celebrational energies of this season.  (OK, I can accept that, because recent surgeries have prevented me from getting out on long walks, as well as doing much-needed yard work; I genuinely enjoy yard work as a way of being in Nature.)  To amplify the Beltane magic, I could do something proactive, like go out and gather some blossoms.  Maybe I can find a watery ditch where the Marsh Marigold, (known as “the Flower of Beltane”) grows, and scramble down to collect a few petals for prosperity magic. 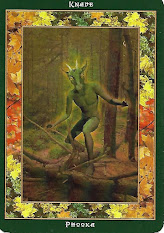 As the flanking cards are both edged with autumnal foliage, we see that those fairies are among those that the Fairy Ring assigns to “The Autumn Court.”  This could indicate being under the influence of issues and events dating from autumn, or issues relating to the autumn of life.

The Phooka card depicts a trickster fairy, best known for its shape-shifting abilities, so it could denote unexpected setbacks.  To turn this around into something positive, I’ll need to think about how I can utilize shape-shifting energies for personal regeneration, perhaps by observing the springtime Earth’s powers of metamorphosis. 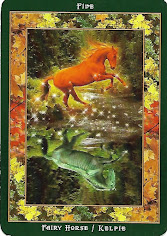 The Fairy Horse, also known as the Kelpie, is also a shapeshifting trickster, (and sometimes the Phooka takes the shape of a horse), so this doubles the shapeshifting trickster implications of this reading.  Note that the reversed side of this card features the darker, more dangerous aspect of the horse, but as my card was upright, it would indicate that I won’t be seeing the worst side of him.  Also, Anna Franklin’s own divinatory meaning for this card is positive, suggesting that “He is the harbinger of good health, vitality, energy, and innovation.”  So that is energizing—even if a wild ride that brings its own set of challenges.

Well, that’s my own Beltane reading, but I present it here to illustrate how you can utilize the card-search technique when you have an oracle deck that features different festivals or seasons.  Obviously, this same technique applies to the seven other Fairy Festival cards.  In this way, the Fairy Ring Oracle is useful in helping you align yourself with the Fairy World as it manifests in the cycle of the seasons.

Posted by Janina Renée at 1:24 PM No comments: