More about THE LOVERS and THE MAGIC OF DOUBLING


In the previous post, we looked at a love spell involving The Steampunk Tarot, which uses an image of doubling in The Sun card, (echoing some of the more antique renditions of this card).  When different creative teams come up with new tarot deck variations, it expands our understanding of the individual cards, and offers new opportunities for magic working.  Another deck which portrays a happy couple in its rendition of The Sun card is the “Tarot of Jane Austen,” (a Lo Scarabeo deck by Diane Wilkes; illustrated by Lola Airaghi).  This deck also portrays a happy couple in The World card, as in the world of Jane Austen, relationship is key to completion and wholeness.  These cards, then, are ideal for a spell where love leads to marriage, as shown below. 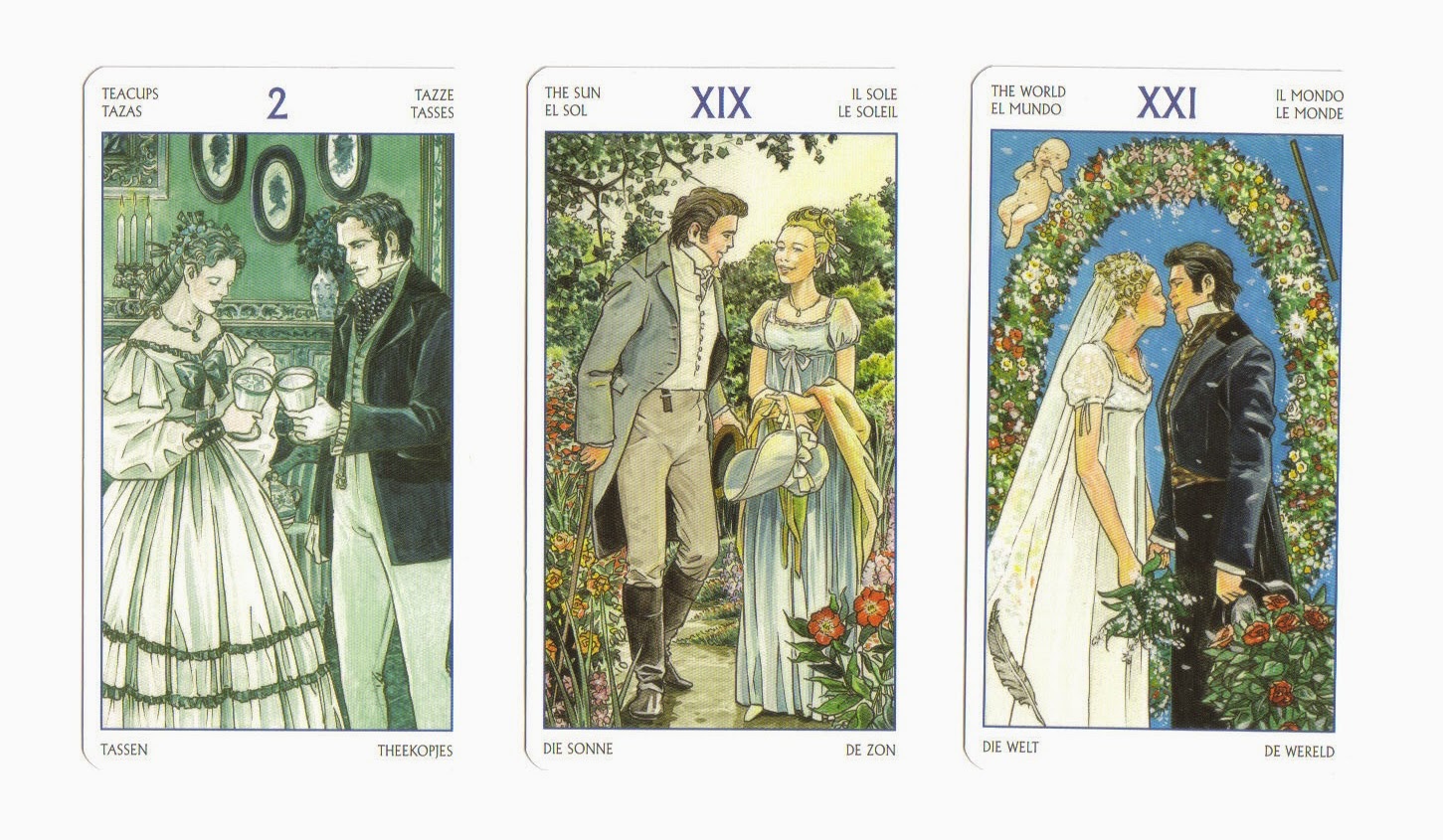 As stated in the previous post, you don’t perform love spells with an intent to bind a reluctant partner to your will, but to send an invitation out into the Universe, to attract the attention of individuals who will resonate to a shared vision of pleasure in relationship.  When performing this spell, as you lay out the cards, you could visualize different ways that you and your potential partner might come together, (while also allowing for unexpected ways of meeting), having fun discovering some things you have in common, and the eventual trip to the altar.

You’ll notice that The Lovers card is not included in this particular spell.  That’s because the Tarot of Jane Austen also uses an older conceptual rendition of The Lovers, that features another woman in the scene.  Older cards which depict the man having to decide between two women make a philosophical statement about choices, and touch on Jungian notions of lunar and solar forces, and the Dark Woman and Bright Lady archetypes.  However, for purposes of a love spell, we normally don’t want to distract attention from the desired one-on-one relationship, because we want the Lovers to be solely and intimately focused on each other.
Posted by Janina Renée at 9:16 AM No comments:

LOVE SPELLS AND THE MAGIC OF DOUBLING


Yesterday’s discussion session at the Triple Goddess centered on how the mysteries of twinning and the magic of doubling can apply to love spells, The Lovers card, and other cards with images of doubling, particularly as they apply to male and female characters.

I want to make a few more points on this topic, but for those who attended, first let me apologize for my tendency to get distracted and confused, so that I don’t stay on track—jumping from topic to topic, dealing with things out of turn, skipping over some individuals, or not giving enough time to their questions and concerns, or too much time to others.  Because my son has been accompanying me, he’s able to give me a retrospective with some constructive criticism on these issues.  Also, because I am aware that I do have these problems, I’m very happy to have people hold my feet to the fire and forcefully pull my attention back to whatever or whoever I should be focusing on.

So anyway, I brought up this combined topic for discussion because I had heard that some of the attendees were particularly interested in love spells, plus the sun is currently in Gemini, the sign of the twins.  When we consider the reasons for engaging in romantic relationships, (as well as friendships, partnerships, and other types of one-on-one relationships), elements of twinning often add verve to the relationship.  There is a desire to find kindred spirits who share some of our personality traits and interests, and so also serve as mirrors to our selves.  However, we also like our partners to have some opposite traits and qualities, so as to complement our strengths and weaknesses.  It is no surprise that in magical twin pairs, opposites are also often portrayed; for example, the cult of the magical twins in Afro-Caribbean culture defines different types of twins, including a male and female pair.  On top of all that, there’s something about the idea of having a twin that is “fun,” so those of us who were not born twins may feel like we’ve missed out on something special.

The joy of having a partner who is a kindred spirit can be brought into love spells that use tarot cards with images of doubling.  As I explained about love spells during our session, the idea is not to coerce some individual into a relationship against his or her will, but to send out a mental call that attracts people who are on your same vibratory wavelength, holding out psychic images of the fun—as well as the fulfillment--you can enjoy together, should they respond to your magical invitation.  For doing tarot spells along these lines, there are of course a lot of images to choose from, to offer different visions of how life can be beautiful in relationship.

In keeping with the themes of pairing and twinning, I was going through my decks to see if any of the newer ones have picked up on images of doubling in The Sun card, as some of the very old versions feature a pair of children, and others a pair of lovers.  (This is in addition to The Lovers card.)  The imagery in question makes an astrological reference to the sun as ruler of the 5th house, which governs love, pleasure, and children—though the image also recalls the Gemini twins.  Although I find very few modern decks that include a human pair in the Sun imagery, this is nicely portrayed in “The Steampunk Tarot” (by Barbara Moore and artist Aly Fell), so this card can be used to bring an image of happiness into a love spell, as illustrated below: 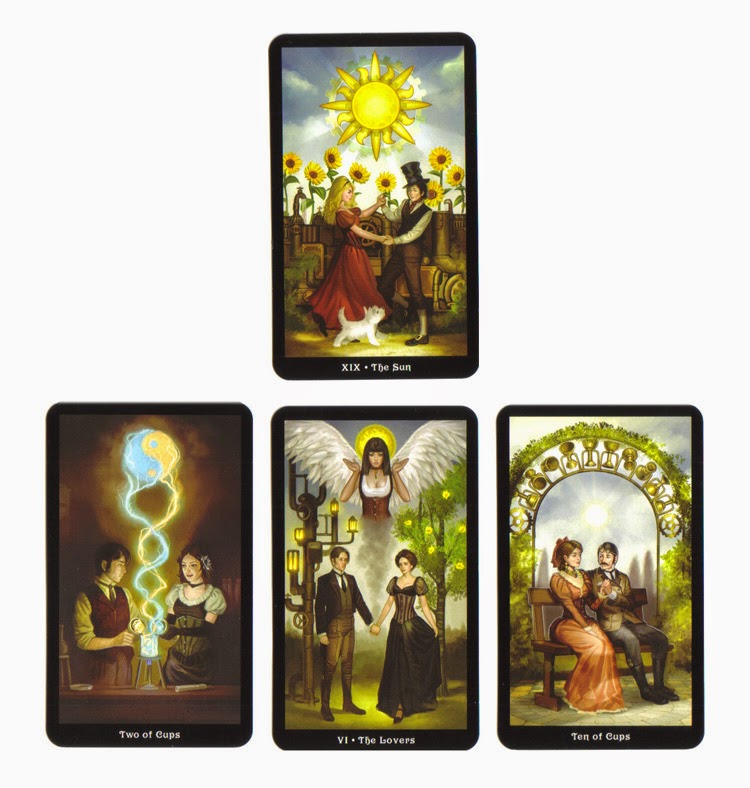 For those who aren’t familiar with the term, “steampunk” is a literary and artistic genre that evokes a Jules Vernian fantasy, (set in the age of steam), and combines 19th century tech with high adventure, and sometimes also magic.  This steampunk tarot spell emphasizes the alchemical quality of an ideal relationship, so as you would be laying out the cards, it would be good to think about the joyful chemistry needed in relationship.  (In fact, if one knew something about chemistry, one could put a test-tube holder next to the card layout, containing two tubes with substances that mix well—and then mix them while thinking about the importance of having the right chemistry with another person;  persons that don’t have a chemistry set, but know something about aromatherapy, could try mixing essential oils.)  Notice, also, that the Steampunk 10 of Cups  puts the pair in more direct focus than other versions based on the Rider-Waite-Smith deck.  I like to have the Sun card up above, in the same way that children’s drawings often have a sun in the sky to denote happiness.

Well, there is a lot more that can be said about bringing images of pairing into love spells and other tarot spells, so I hope to say a bit more about that in my next post.
Posted by Janina Renée at 5:00 PM 2 comments: