TAROT SPELL FOR BLESSING THE YEAR 2021

Using magical numerology and tarot, we find that each year corresponds to a tarot card or cards.  In the case of 2021, we have 2 + 0 + 2 + 1, which = 5, the number of The Hierophant card.  Additionally, because many of us pronounce 2021 as “Twenty Twenty-One,” this also corresponds to the Judgement card plus The World cards.  With all of these cards in mind, we can do a little tarot spell to help us focus on positive images for the year ahead.  While it is obviously too late to perform this spell on New Year’s Eve or New Year’s Day, it can actually be performed at any time on any day in this new year 2021.

But first, a few words about the cards:  In modern decks, the Major Arcana’s card Number 5 is more frequently called The Hierophant, while in older decks, it was called The Pope.  Historically, the hierophant was a priest who explained the Mysteries, and who was chosen for the beauty of his voice.  Some alternative decks have labeled this card The High Priest, The Teacher, Guidance, Faith, and Knowledge.  This card generally pertains to instruction, including knowledge passed down through religious authorities and cultural traditions.  Card no. 20, variously spelled Judgment or Judgement, is about awakening, and has also been labeled Karma, Beyond Illusion, The Aeon, Phoenix, Rebirth, and Transcendence in some alternative decks.  Card No 21, The World, is about wholeness, and has been relabeled by some as Ascension, Completion, Psyche, and The World Tree.  Taken as a grouping, these cards make a statement about expanding one’s consciousness and striving for wholeness in the process of learning and teaching.

In the tarot spell below, I illustrate the layout with cards from the Gaian tarot by Joanna Powell Colbert, which labels The Hierophant as The Teacher, Judgement as Awakening, and The World as Gaia. 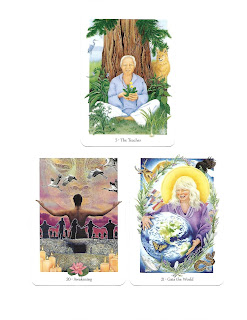 To perform the spell, first lay down The Hierophant, while saying:

The Year Twenty and Twenty-One:

A year of teaching, a year of learning.

Then place Judgment and The World in the positions as indicated in the illustration above, (creating a pyramidal layout), while saying:

So may we awaken to a World of Blessing,

Then, give yourself some time to contemplate the cards’ associations and imagery while thinking about ways that you can open yourself to new knowledge--especially in the service of world healing and wholeness.  You may even create some new teaching traditions to pass along.

(Note: Consider how the year 2021 gives us this meaningful combination. It won't work for 2022, because the Major Arcana only goes up to 21.)