OPENING THE DOOR TO THE MAGICAL HOUSE OF 2022

Although the Dollhouse Oracle can be performed at any time to take a fanciful walk through the metaphorical House of Your Life, I was thinking about the occasions one can perform the Dollhouse Oracle as a way of looking into the year ahead--as, due to different cultures’ having different dates for the start of the year, there are multiple times within a year to celebrate new beginnings.  As the ancient Celtic New Year began on Halloween, (Samhain), last Halloween, I entertained friends with another dollhouse popout, known as “The Witches’ Scary House,” (by Ib Bellew, Mick Wells, Ian Honeybone, and John Lupton).  The idea is to confront the things that can scare you in the year ahead.  Though meant for the strong of mind and spirit, it is done in a light-hearted way—as a way of taming your fears by better preparing for them.

Because in astrology, your birthday is your solar return, (when your sun returns to the degree it was in on the day you were born), your birthday is your personal astrological New Year, so a good occasion to do a divination for the year ahead of you.  Therefore, I’m thinking to do the oracle on my birthday as a way of looking at my very personal issues as they manifest throughout the year, but doing the New Years’ Day divination as a way of looking at what is in store for myself in relation to what’s going on in the world at large in 2022.

So, after shuffling and cutting the cards, the first card goes into the first room, which is the entry hall.  This position relates to your linking to the outside world, as well as what is entering your life.  In this way, it pertains to who or what is coming in, as well as to your ability to go out and about.  In this case, I got the “The King of Summer,” which in this fairy deck corresponds to the King of Cups.  This card traditionally denotes a gentleman who is jovial and presides over celebrations, but can also be given to excess.  This suggests that despite the current rise in COVID cases, we may all soon have something to go out and celebrate, (though there is also the potential of overdoing it, as some of us may get careless when we are finally able to get back out into the world again).  It is also significant that the first card is a King, as kings denote being in charge, and they can also denote the appearance of people who have the power to help us. 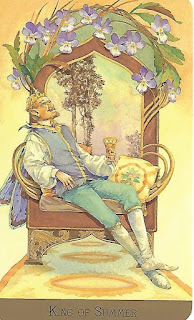 The King of Cups/ King of Summer in this front entry position also made me think about the old New Year’s tradition of first-footing, as well as various New Years’ traditions of opening the door to let in the New Year.

I think that opening the door first thing in the morning on any day is a deeply meaningful spiritual practice, as well as a magical act.   However, in many countries, there is a tradition of opening the front door to welcome the New Year.  (Some also open the back door to let out the Old Year).

First-footing is a tradition which was especially prevalent in Scotland, though variations of the practice are known in other parts of Europe.  The belief was that the first person, (other than household members and other persons already present), to enter your house after the hour of midnight on the new year should be someone auspicious, because the nature of the person would determine the nature of your luck for the year ahead.  Many people made it a practice of arranging with a luck-bringing person in advance.  Due to cultural prejudice, this should always be a man.  This person should also bring a symbolic gift symbolizing prosperity, such as a coin or a loaf of bread, as it would be inauspicious to come empty-handed.  Certainly the King of Cups is one of the more auspicious tarot characters to come through your door.  Interestingly, because in this deck he is called the King of Summer, this could denote more summer-like conditions coming for what (at least in my state of Michigan) has been a particularly chilly winter.  However, I do recall a year when it got so warm, that I was gardening in shirt-sleeves in February.  Otherwise, it may be a metaphorical summer, as in a time of warmth and pleasure.

When a tarot card portraying an archetypal character appears in the entry of the Dollhouse Oracle, it is good to make a suitable greeting.  Here, I could say, “I welcome the King of the Year into the House of My Life.  May it be a bright year, a bold year, a golden year, a year of magic!”  (This last line I’ve adapted from my “Candle Spell to Welcome the New Year” in my book “By Candlelight: Rights for Celebration, Blessing, and Prayer.”)

Another thing: the King of Summer in this position suggests the archetypal battle between the Summer King and the Winter King, which relates to Celtic legend, and is enacted in European folk festival pageants, where the avatar of Winter is defeated by the avatar of Summer at the time of winter solstice, when the year wheel turns and the days begin to lengthen.  The Summer King then reigns until the summer solstice, when he, in turn, is defeated, and the days begin to shorten.  If we associate the eight cards in the eight rooms of the house to the quarter and cross-quarter days of the folk calendar, the entryway would link to the winter solstice, because, (before various historical calendar adjustments), the winter solstice used to fall on January 1st.

Now, as I am pressed for time, I shall continue the tour of the House of 2022 in an upcoming post.