CONTINUED TOUR OF THE HOUSE OF 2022

Having walked through the downstairs chambers of the dollhouse symbolizing the magical, metaphorical House of 2022, we now head upstairs.

But before going farther, I want to emphasize that because the Tarot works holographically, in a New Year’s reading to look into my house or your house, issues that affect you or me will be reflected in our larger society—and vice versa.  That’s why I say the divination done here is a way of looking at what is in store for myself, but also in relation to what’s we might expect for the world at large in 2022.  (By the way, if your birthday is January 1st, any New Year’s forecast will be especially relevant to your year ahead.)

For the upstairs hallway, which pertains to how well one moves through the different compartments of one’s life, (and therefore how well the different areas of one’s life are integrated), I pulled the reversed Herald of Autumn (i.e. Page of Pentacles).  Because this tarot personality is focused on the needs of everyday life, the reversed card may indicate some setbacks in getting around to attend to different needs.  At this point, it should be obvious that a number of the cards that have been drawn can predictably relate to the inconveniences of the ongoing COVID situation, as it surges, subsides, and surges again.

Stepping into the master bedroom, the card drawn is the Two of Autumn, (Two of Pentacles), reversed.  For people in intimate relationships, the card symbolism associated with the bedroom can apply to the quality of the relationship, while for solitary persons, it may have more to do with their ability to rest and regenerate.  In either case, this is not an auspicious card for the bedroom, because it depicts the challenges of balancing one’s own material needs with the needs of others.  The balance is even more difficult as portrayed in the Victorian Fairy Tarot, where an elderly fairy rides a unicycle as he attempts to clutch a bunch of hazel nuts.  Here, the reversed card additionally suggests the graphic image of falling off the unicycle. 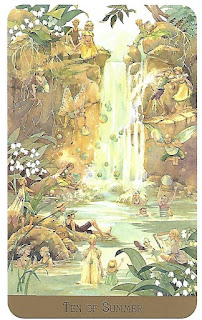 The next room is the bathroom, which relates to health and body issues, as well as purification.  The card that came up for this room is the Ten of Summer, (Ten of Cups), which denotes the well-being we enjoy through family and community relationships.  This particular card portrays fairies enjoying themselves as they swim and play in a pool by a waterfall.  (Note the parallelism between the Ten of Summer and the Ten of Autumn, which both portray happy community scenes.)  As this card is very auspicious for health and happiness,  I wonder if this could foretell the end of the pandemic, or maybe we’re all just more health conscious as a result of it.  If aligned with a timeline, this card position relates to Lammas, (the cross-quarter day which falls in August), and this is significant for me personally, because that’s when I plan to retire, so that I can start rebuilding my health (as well as my writing career).

The final room is the nursery.  If you have children, cards in this position can relate to their concerns.  (Due to the fact that many of us live with other people, we do have to expect that their issues are going to be encountered in certain rooms of the house.)  Otherwise, this can relate to issues concerning your Inner Child, as well as your capacity for creativity and generativity.  The card that came up for this room is the Empress reversed, which is quite striking, because this VFT deck portrays the Empress as a fairy queen surrounded by four children of different ages, who are pulling on her skirts.  I don’t offhand recall any other tarot decks that show the Empress with children, though she is often portrayed as pregnant to emphasize her own qualities of creativity and generativity.  However, because the card is reversed, it could warn of challenges in parents’ relationship with children, (possibly due to the social isolation of the pandemic).  Otherwise, it could pertain to challenges in creative work.  To turn this around to stimulate creative vision and inspiration for the year 2022, we might try reconnecting with the things that gave us joy when we were very young, as these have the power to generate new vitality in older age.

Although that completes the house tour, there was one more card.  While I was shuffling, the Temperance card almost fell out of the deck, and then when I had pulled the eight cards for the rooms, Temperance was the next card in line in the deck order.  The illustration for this card shows a fairy in green, who drips droplets from a green leaf into a green elixir in a golden goblet.  As Temperance is about living in balance and often pertains to health issues, I think this sums up much of the advice offered in this overall reading.