MOVING ENERGY IN THE HOUSE OF 2022

Yesterday’s post described using the Dollhouse Oracle to get a tour of the House of 2022, by seeing who’s coming in the front door.  Today I continue moving through the rest of the rooms downstairs.

So, after greeting the King of Summer in the entry way, (King of Cups in a conventional deck), we move to the parlor.  The card pulled for this room was the Five of Spring.  This would be the Five of Wands in a conventional deck, which usually portrays a group of five men in a melée with quarterstaffs, and in this room of the dollhouse denotes the moving energy that forces changes in lifestyle.  In the Victorian Fairy Tarot, the image is more festive, portraying five old male fairies dressed as Morris dancers, with circlets of bells tied to their knees; they are wielding sticks as they perform a “Sticks and Bells” form of this traditional folk dance, where the dancers tap their staves against each other in rhythm as they perform a circular dance.

When performing the Dollhouse Oracle, one should think about how the card imagery interacts with the room imagery.  In this case, the card’s energy is chaotic, because stomping around in this Victorian parlor, (with all of its cluttered furniture and fragile ornaments, including a tea set on a little table), could result in broken china.  Thus, this card could also warn of incautious celebration, in the same way that the King of Cups can denote excess.

We proceed into the dining room, where we have the Five of Summer, (i.e. Five of Cups), whose card image depicts a girl’s sandcastle being assaulted by the waves of an incoming tide.  As sand and wave activity are incongruous images for a dining room, we see how the disruptive energy of the Fives also flows through this area of life.  However, the card is reversed, so changes may not be experienced as intensely by myself and by the general population—though they can still be a cause for anxiety.  Because the dining room can denote our linking to tradition, (as dining rooms are often reserved for formal occasions), our anxieties might relate to changes in our customary way of doing things).  Because of the recent COVID resurgence, I should say continued changes in our way of doing things. 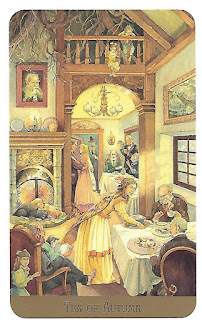 By contrast, the next card, for the kitchen, is very auspicious for stability, prosperity, and tradition, because it is the Ten of Autumn, (Ten of Pentacles), which can pertain to values passed down through families and traditions.  The card depicts a multigenerational fairy family feast, so the graphic imagery of the card is very congruous with the graphic imagery of the kitchen.  In fact, the room in the foreground is either a kitchen or dining room with a fireplace where some of the group are eating at a table, and we also see into the room behind it, where more are at another table, while a door in that wall is open to show additional family or friends arriving.  In addition to foretelling the plenitude we like to see in kitchen imagery, it may denote our ability to reconnect with a greater number of family and friends.

By the way, if we also want to associate the rooms of the house to the festival year, the living room would relate to Candlemas (February 2nd), the dining room to Spring Equinox (about March 20th in 2022), and the kitchen to Beltane/May Day (May 1st).

Well, I will close here, but will continue with a tour of the upstairs of the house in my next post.